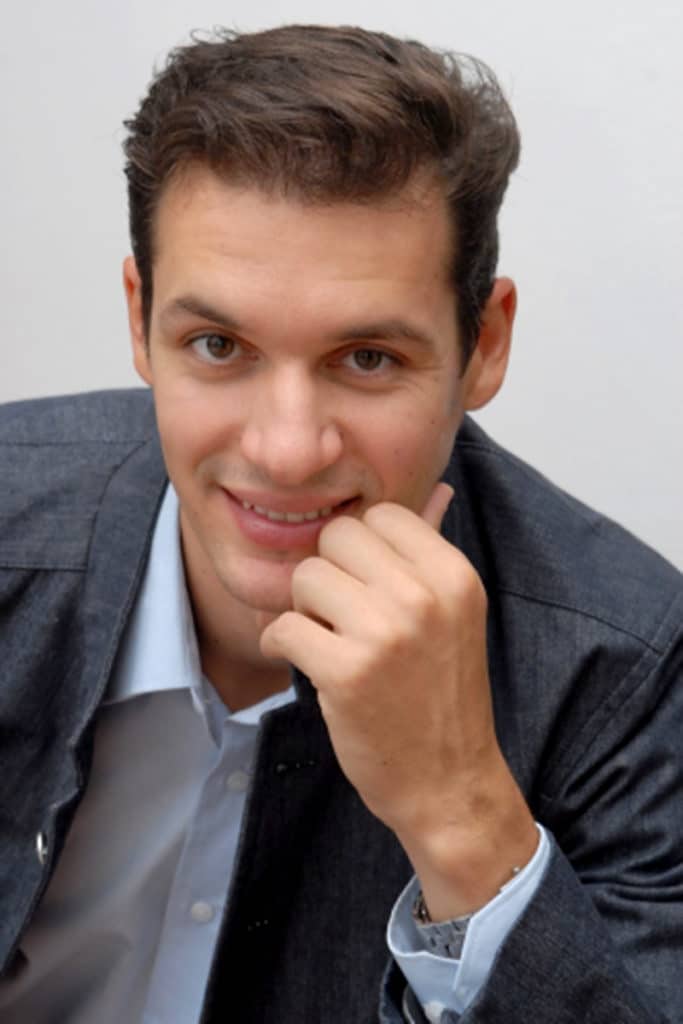 The seasons 2018-19 to 2019-20 include e.g. his extremely successful role debut as Vodnik in Dvořák's "Rusalka" (M. Pitrenas / V. Nemirova) at the St. Gallen Theater, his New York debut as Il Endre in Erkel's "Bánk Bán" and repeatedly Mustafa at the Hungarian State Opera. He also appeared as Bluebeard in Bartók's "Bluebeard's Castle" at the Teatro Sao Carlos in Lisbon. In 2020-21 Marcell Bakonyi planned to return to St. Gallen as Kaspar in a new production of "Der Freischütz" (cancelled). Plans at the Hungarian State Opera this season include the leading role of Sulpizio in Donizetti's "La fille du régiment" (open air ), Il Endre in a new production of "Bánk Bán" and Landry/Marinoni in Testoni's "Fortunio/Fantasio".

Marcell Bakonyi was born in 1980 in Györ, Hungary. He first attended the Leo Weiner Conservatory in Budapest.

Initially he attended the Leo Weiner Conservatory in Budapest but then switched to the University of Music and Performing Arts in Stuttgart, where he became a member of the opera school. Here he studied voice with Julia Hamari and attended the art song class of Cornelius Witthoeft. In 2007 he graduated with honors.

While still a student, he was a guest at the Pforzheim Theater and shortly afterwards at the Heidelberg Theater. At the Junge Oper Stuttgart he sang the role of the Dreamer (Träumer) in the world premiere of the opera "Papa" by H. Heeb. In addition, Marcell Bakonyi appeared in the leading role of Lord Sidney (Il Viaggio à Reims) under Alberto Zedda at the Accademia of the Rossini Festival in Pesaro.

In the 2008-09 season Marcell Bakonyi was a member of the Zurich Opera Studio. His roles there included Fafner in "Siegfried" and Alberich in "Rheingold", in a children's version of Wagner's "Ring" as well as the Steersman in the premiere of "Tristan und Isolde" in the regular program of the Zurich Opera.

From 2009-10 to 2012-13 he was a member of the ensemble of the Salzburg Theater, where he sang roles such as Figaro and Bartolo (Le nozze di Figaro), Kaspar (Der Freischütz), Bacco in the baroque opera "Arianna" by Benedetto Marcello, Dulcamara (L'elisir d'amore), Leporello (Don Giovanni), Alidoro (La Cenerentola), Don Alfonso (Così fan tutte) and Il re di Scozia in Handel's "Ariodante". From February 2016 Marcell Bakonyi had a residency contract at the Nuremberg State Theater, where he could be heard as Leporello as well as Huascar in Rameau's "Les Indes galantes". In 2016-17 he returned to Nuremberg for guest appearances as Mustafa in the new production of Rossini's "L' italiana in Algeri" to great acclaim.

GUEST ENGAGEMENTS have already taken the young bass to renowned venues. At the Schwetzingen SWR Festival 2009, Marcell Bakonyi sang the role of Varo in Handel's "Ezio" with great success (director: Günther Krämer, conductor: Attilio Cremonesi). In 2010 he appeared at the International Davos Festival in the world premiere of the opera "Der Zauberberg" by Gregory Vajda in the role of Joachim Ziemssen and at the Herrenchiemsee Festival 2010 and 2011 as the 2nd Armoured Man (The Magic Flute) under Enoch zu Guttenberg, a revival took place in 2013 and 2015 at the Prinzregententheater Munich (DVD production for FARAO Classics). In 2012 he made his US debut as the Speaker (The Magic Flute) at the Crested Butte Festival in Colorado. There he could also be heard as Sarastro in a concert performance of the "Magic Flute". In 201-/13 he sang Kaspar in the "Freischütz" production by Nigel Lowery at the Giessen Theater under the baton of Michael Hofstetter. At the Haydn Festival in Eisenstadt (Esterházy Palace) he appeared as Nanni in "L'Iinfedeltá delusa" and at the Opéra de Vichy as 2nd Armoured Man. Since 2013 he has appeared at the Innsbruck Festival of Early Music in roles such as Publio in Mozart's "La clemenza di Tito" under Alessandro De Marchi, Polifemo in the Handel pasticcio "Duello Amoroso" under Attilio Cremonesi, and in 2017 as Antinoo in Monteverdi's "Il ritorno d'Ulisse in patria". Since 2011-12, frequent guest engagements also led him to the Norske Opera Oslo, where he appeared as Antinoo and in several seasons as Leporello alongside Ildebrando D'Arcangelo and as Colline (La Bohème) - most recently in 2017.

In 2018 Marcell Bakonyi made his debut at the Macearata Sferisterio Opera Festival in Italy as the Speaker (The Magic Flute), directed by Graham Vick.

Marcell Bakonyi has been a regular guest at the Hungarian State Opera in Budapest since 2011-12. His roles there include Il Endre in Ferenc Erkel's opera "Bánk Bán", Pietro (Simon Boccanegra), Colline, Masetto, Escamillo, Ferrando (Il Trovatore) and Mustafa (L'italiana in Algeri). In 2017 he was able to record a great personal success there as Figaro (Le nozze di Figaro). In the same year Marcell Bakonyi could be heard as Cecco del Vecchio in "Rienzi" at the Palace of Arts (MüPa) in Budapest under Adam Fischer as part of the Budapest Wagner Days festival.

The seasons 2018-19 to 2019-20 include e.g. his extremely successful role debut as Vodnik in Dvořák's "Rusalka" (M. Pitrenas / V. Nemirova) at the St. Gallen Theater, his New York debut as Il Endre in Erkel's "Bánk Bán" at the David H. Koch Theater as part of a guest performance by Hungarian State Opera Budapest as well as Ashby (La fanciulla del West) and repeatedly Mustafa at the Hungarian State Opera. He also appeared as Bluebeard in Bartók's "Bluebeard's Castle" at the Teatro Sao Carlos in Lisbon and should have appeared as the Second SS Man in Weinberg's "The Passenger" at the Teatro Real Madrid (cancelled due to Covid 19). In 2020-21 Marcell Bakonyi planned to return to St. Gallen as Kaspar in a new production of "Der Freischütz" (cancelled). Plans at the Hungarian State Opera this season include the leading role of Sulpizio in Donizetti's "La fille du régiment" (open air on Margaret Island, Budapest), Il Endre in a new production of "Bánk Bán" and Landry/Marinoni in Testoni's "Fortunio/Fantasio".

KONZERT: CONCERT: As an oratorio soloist, he has so far mainly performed in the great passions of J.S. Bach (St. Matthew Passion, St. John Passion) as well as in works by Mozart, Handel and Dvořák. He was the bass soloist in a series of concerts with Bach's "Christmas Oratorio" with the collegium juvenum boys' choir and the baroque orchestra L'Arpa festante. He sang the role of Pilatus in the "St. John Passion" under Enoch zu Guttenberg at the renowned Herrenchiemsee Festival and was heard in Handel's "Messiah" with the Bonn Classical Phiharmonic under Heribert Beissel. With the Bach Collegium Munich he sang Mozart arias at the Philharmonie am Gasteig in Munich to great acclaim. At the Tonhalle Zurich he appeared as the bass soloist in Bruckner's "Mass in F minor" with the Orchester Musikkollegium Winterthur. Under Enoch zu Guttenberg he sang the bass arias in J.S. Bach's "St. Matthew Passion" with the Hofer Symphoniker, and he was the bass soloist in Verdi's "Requiem" with the Brussels Choral Society at the Palais des Beaux-Arts in Brussels under Bartholomeus-Henri Van De Velde. Other concert highlights were Dvorák's "Stabat mater" with the Hungarian Radio Symphony Orchestra, Bach's "B minor Mass" under Alessandro De Marchi at the Innsbruck Festival of Early Music and in Italy, Bach cantatas with the ensemble Il Gusto Barocco as a part of the Bach Week in Ansbach, Schubert's oratorio "Paradise and the Peri" as part of the matinee concerts of the Concertgebouw Amsterdam as well as Beethoven's 9th Symphony at the Hungarian State Opera. In 2018 he performed Mozart's "Requiem" at the Théátre des Champs Elyseés under the musical direction of Quentin Hintley, followed by the world premiere of "Ecce Homo" by José Cura, Beethoven's "Missa solemnis" at the Budapest Music Academy and Haydn's "Nelson Mass" with the National Philharmonic Orchestra Budapest. In 2019 Marcell Bakonyi could be heard in Dvořák's "Stabat mater" at the Casa de la Musica in Porto with the Orquestra Sinfónica do Porto under Baldur Brönnimann and in Bach's "St. Matthew Passion" at the Hungarian State Opera. Dvořáks „Stabat mater“ in der Casa de la Musica in Porto mit dem Orquestra Sinfónica do Porto unter Baldur Brönnimann und in Bachs „Matthäuspassion“ an der Staatsoper Budapest zu hören.