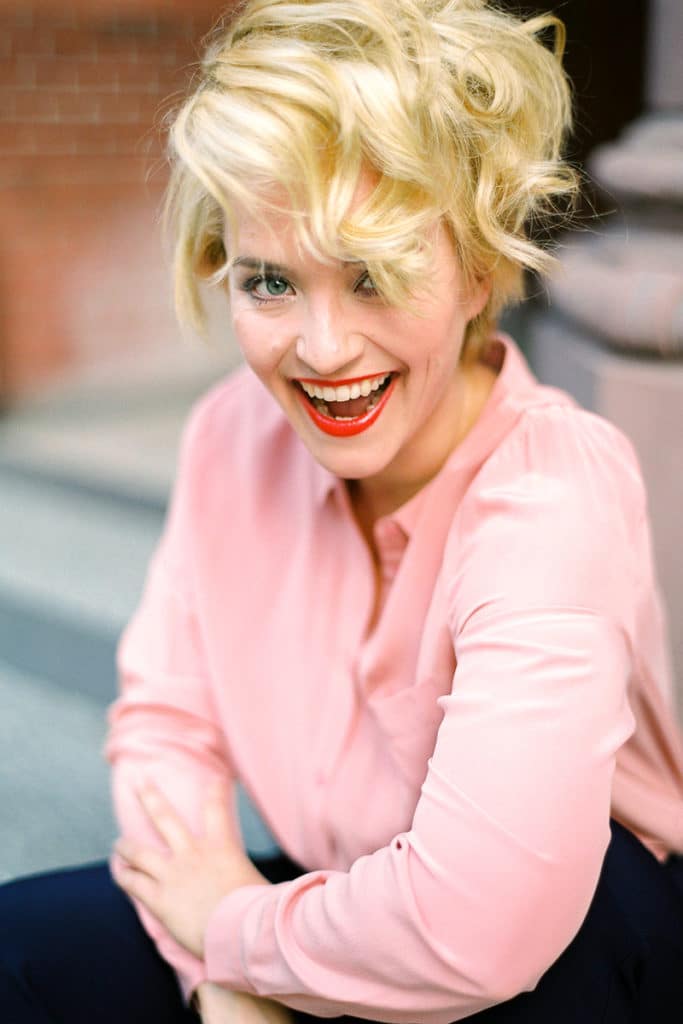 Hanna Herfurtner was born in Munich. After studying theatre studies and art history at the Ludwig Maximilian University of Munich, she then switched to vocal studies at the State University of Music and Performing Arts Stuttgart and subsequently at the Berlin University of the Arts. Sie studied with Prof. Julie Kaufmann, and later with John Norris and Maria Janina Hake.

Today the soprano is an experienced interpreter, especially of early music and contemporary music.

Hanna Herfurtner was a prize-winner in the International Singing Competition for Baroque Opera Pietro Antonio Cesti at the Innsbruck Festival of Early Music in 2010, as well as receiving the special prize of the Resonanzen early music festival from the Konzerthaus in Vienna, where she has been a regular guest ever since, most recently with Concerto Melante.

In 2012 and 2013 she was Singer in Residence at the Trigonale Early Music Festival, where she per-formed with Baroque soloists and the Ensemble Sirocco, Franco Pavan and Alfredo Bernardini, among others.

Numerous CD recordings with the Cologne Academy, the Bach Consort Wien and the State and Cathedral Choir of Berlin document the range of her repertoire.

Her active concert schedule comprises a broad oratorio repertoire with works by Monteverdi, Bach and Händel and by Mendelssohn, Brahms and Honegger. It takes her throughout Europe, including to the Theater an der Wien, the Konzerthaus Berlin, the Festspiele Mecklenburg-Vorpommern and the Norwe-gian National Opera. She closely collaborates with Wolfgang Katschner and the Lautten Compagney Berlin. Joint engagements have led her to the Summer Festivities of Early Music, Prague, RheinVokal and the Mozartfest in Würzburg. She debuted in spring 2018 at the Händel Festival in Halle as Clio, the leading female role in Händel's "Parnasso in Festa" directed by Sigrid t'Hooft, specialist in Baroque ges-ture. In the following season she sang Morgana there in Händel's "Alcina", as well as Almirena in "Rinal-do" and Arianna in "Il Giustino" on a tour of southern Germany and Switzerland. She is also a regular guest in the lounge format of the Lautten Compagney live at the Theater im Delphi Berlin, as well as online in recent months.

In the summer of 2009 she debuted at the Ruhrtriennale as "naked virgin" in Arnold Schönberg's Moses and Aaron directed by Willi Decker. In the following year she sang the title role in the premiere of Hans Werner Henze's last opera "Gisela".

She has sung at the Salzburg and Bregenz Festivals, at the Staatsoper Berlin, the Cologne Opera, the Frankfurt Opera and the Nederlandse Reisopera. In 2012 she was a member of the ensemble of the Kiel Opera for a short time, where she sang Olympia in "Les Contes d'Hoffmann" and Fraarte in Händel's "Radamisto", among other roles. She was involved in numerous premieres - for instance, in "Mauerschau" by Hauke Berheide in 2016 at the Munich Opera Festival, in Klaus Ospald's "Ungefroren ist die Erde" with the Coburg Symphony Orchestra, as well as at the opening premiere of the Schwetzingen Festival in Annette Schlünz's "Tre Volti" in 2017. In 2016 she debuted at the National Forum of Music in Wrocław with Ligeti's "Mysteries of the Macabre". Most recently she performed in "A Monteverdi Project" at the Berlin Staatsoper's Barocktage.

The Lied is also very close to her heart. She received powerful impetus in the genre from Axel Bauni and Eric Schneider. In the fall of 2009, she won First Prize at the Paula Salomon Lindberg Competition in Berlin with pianist Stefan Paul. In recent years, Hanna Herfurtner has been a guest with various programmes at the Heidelberg Spring Music Festival, the Coburg Music Club and in the Konzerthaus in Vienna, among others. In August 2012 she performed Hugo Wolf's "Italienisches Liederbuch" together with Jonathan Ware at the Rheingau Music Festival. She tours with new interpretations of John Dowland's songs as a duo with jazz guitarist Max Frankl.

In addition, she is the co-founder and artistic director of the vocal ensemble THE PRESENT, which is specialised in intertwining early and contemporary music. It is supported by the German Federal Cultural Foundation in the scope of the "Reload" grant programme.