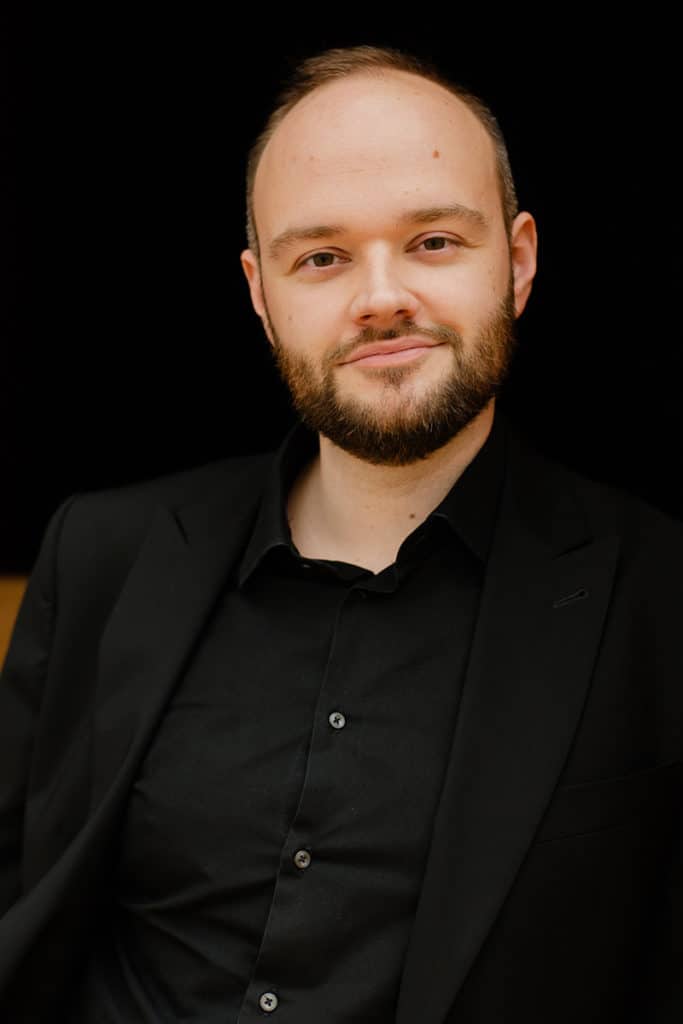 The young tenor Florian Sievers was born in Hamburg, Germany. He studied voice with Prof. Berthold Schmid at the Leipzig University of Music and Theater and graduated in 2018 with distinction. Florian Sievers, now in demand as a concert and oratorio soloist, already appeared in the opening concert of the Musikfest Stuttgart 2017 in J. S. Bach's St. John Passion under Hans-Christoph Rademann.

The young tenor Florian Sievers was born in Hamburg, Germany, which is also where he made his first steps as a singer with the boys' choir 'Chorknaben Uetersen'. He subsequently studied voice with Prof. Berthold Schmid at the Leipzig University of Music and Theater and graduated in 2018 with distinction.

Engagements 2018 - 2020 include the evangelist part in Bach's St. Matthew Passion with La Cappella Reial de Catalunya and Le Concert des Nations under Jordi Savall at L'Auditori de Barcelona, at the Château de Versailles and at the Philharmonie de Paris with CD recording, staged performances of Bach cantatas directed by Clara Pons with the Lautten Compagney Berlin under Wolfgang Katschner at the Leipzig Bach Festival 2019, Beethoven's 9th Symphony with the Sønderjyllands Symfonieorkester under Matthias Janz in Denmark, Bach's Christmas Oratorio at the Great Hall of the Leipzig Gewandhaus with the Gewandhaus Choir under Gregor Meyer, Rossini's Petite Mass solennelle with the Athos Ensemble in France, Monteverdi's 'Vespro della Beata Vergine' and various Bach cantatas at the Thomaskirche Leipzig - some of which were part of the festival MDR Musiksommer 2019-, Bach's St. John Passion at the Laeiszhalle Hamburg under Matthias Janz, Bach's Christmas Oratorio at the Kreuzkirche Dresden with the renowned Kreuzchor under Roderich Kreile, Schubert songs in the chamber music hall of the Elbphilharmonie Hamburg with Ragna Schirmer and Pia Davila, Handel's Acis and Galathea under Jaroslaw Thiel at the National Forum of Music in Wroclaw as well as a tour to Italy, Slovenia, Germany and Spain with Mozart's Requiem under Frieder Bernius in April 2020 (cancelled due to Covid 19).

Plans for 2020/2021 include Bach's Christmas Oratorio at the Liederhalle Stuttgart with the Stuttgart Hymnus Boys' Choir under Rainer Homburg and at the Gewandhaus Leipzig under Gregor Meyer. Florian Sievers will also sing the Evangelist in J. S. Bach's St. Matthew Passion as part of a tour with the Noord Nederlands Orkest under Jos van Veldhoven. Two CD recordings with works by Haydn and Schubert are planned with Frieder Bernius.

Florian Sievers gained operatic experience as Baron Kronthal in Lortzing's "Wildschütz", Mamud in Vivaldi's "La verità in cimento" and as Pastore and Spirito in Monteverdi's "Orfeo". As part of these he worked with directors including Michael Höppner and Clara Pons. Since the 2019-20 season he has been bound by a residency contract at the Chemnitz Theater, where he drew attention to himself in the leading role of Wachtmeister Meier in the world premiere of the family opera "Bei der Feuerwehr wird der Kaffee kalt". In addition, roles like Pedrillo, Dancairo, 1st Nobleman of Brabant (Lohengrin) and 1st Prisoner (Fidelio) were on his agenda as well as plans for Tamino (cancelled).

His work has been documented in numerous CD and radio recordings e.g. for cpo, Rondeau, Deutschlandfunk Kultur, MDR Klassik and NDR Kultur, including a first recording of the romantic oratorio "Mose" by Bernhard Adolph Marx with the Gewandhauschor under Gregor Meyer and rediscovered solo works by the Hamburg church music director Thomas Selle. The CDs are planned to be released in 2021. In 2020 a recording of a completely soloists sung version of St. John Passion (J. S. Bach, 2nd version, 1725), with the ensembles AElbgut and Wunderkammer, was released by Covielo Classics (OPUS KLASSIK 2020 award in the category "Choral Work of the Year")