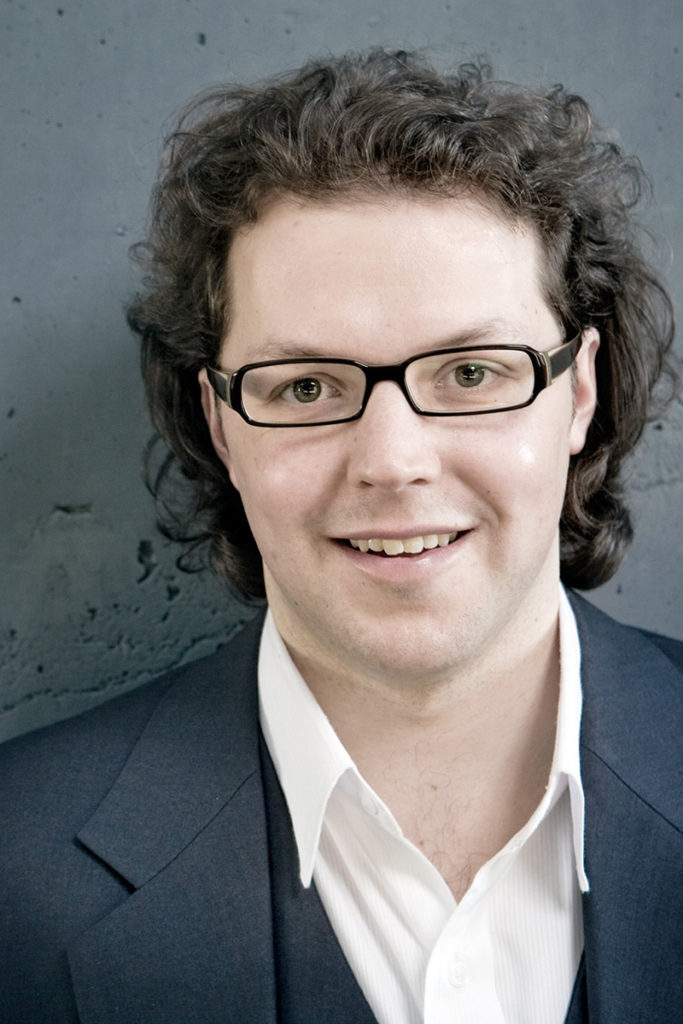 In 2020-21 the title roles in the new productions of Mozart's "Le nozze di Figaro" at the Lübeck Theater (conductor: Stefan Vladar, director: Steven Lawless; postponed to 2022) and in Vivaldi's "Il Bajazet" at the Nuremberg State Theater (conductor: W. Katschner, director: Nina Russi) are on his agenda. Further plans include Damon in Telemann's "Pastorelle en musique" at the Festival of Early Music in Innsbruck, Porus in Handel's "Cleofida" with German recitatives by Telemann at the WDR festival 'Tage Alter Musik' in Herne, Amanzio and Polidarte (Il Giustino) at the Göttingen Handel Festival and the "Sea Symphony" by R. Vaughan Williams with the Staatskapelle Dresden.

Florian Götz initially studied school music and trumpet in Stuttgart before completing his vocal studies at the Guildhall School of Music and Drama in London with Paula Anglin and Mark Packwood, which he passed with distinction. This was followed by further studies with Michael Rhodes, and with Mario Hoff and Ulrike Fuhrmann at the University of Music Franz Liszt in Weimar (Konzertexamen). In addition, he attended master classes with Gregory Lamar, Kurt Widmer, Malcolm Martineau, Brigitte Fassbaender, Claudia Eder, Christian Curnyn, Sarah Walker and Graham Johnson. He also took part in the excellence course "Baroque vocal" at the Mainz University of Music. Today, Florian Götz is coached by Margreet Honig since 2013.

Florian Götz has won prizes at competitions such as the International Kammeroper Schloss Rheinsberg Competition and is a scholarship holder of the Robert Bosch Foundation and the Richard Wagner Association.

Florian Götz was a member of the Thuringian Opera Studio and was then directly onboarded into the ensemble of the Theater Erfurt, where he sang from 2010 to 2013 numerous specialist roles such as Papageno (The Magic Flute), Dr. Falke (Die Fledermaus), Belcore (L'elisir d'amore), Ping (Turandot), Schaunard (La Bohème), Dandini (La Cenerentola), Jupiter (Orpheus in the Underworld), Tio Lukas (The Corregidor), Morales and Le Dancaire (Carmen), Ottokar (Der Freischütz) and Silvano (Un ballo in maschera). He has also devoted himself to the contemporary repertoire, and has for example sung roles such as Taylor in "Der leuchtende Fluss" by J. Doderer and Mr. Parker in "Die Frauen der Toten" by A. Bröder, both of which were world premieres.

Florian Götz pays special attention to the baroque repertoire. He has interpreted numerous roles such as Handel's Elviro in "Serse", Pallante in "Agrippina", Argante in "Rinaldo", Fenice in "Deidamia", but also unusual roles such as Scarlatti's Gildo in "Penelope la Casta" at the WDR radio station in Cologne. He has been a guest at the Handel Festivals in Halle and Göttingen and the Rheingau Music Festival several times.

In 2012 the baritone made his debut at the Opéra Bastille in Paris as Artabano in Pagliardi's "Caligula delirante" under Vincent Dumestre with the ensemble Le Poème Harmonique. This was followed by several appearances at French theaters, including the Opéra de Reims and the Opéra de Rouen, as well as the Théâtre de l'Athénée in Paris. In 2020 he could also be seen again in France as part of this production.

High praise from the critics (Opernglas 2012: "Reminiscent of Walter Berry in timbre and realisation, Florian Götz shone in the role of Nardo") received his realisation of the role of Nardo in the first recording of Anfossi's "La finta giardiniera" for Harmonia Mundi / Sony under Werner Ehrhardt with the Ensemble l'arte del mondo. With the Lautten Compagney Berlin under Wolfgang Katschner, he sang the role of Mago in Handel's "Rinaldo" at the Concertgebouw Amsterdam and Argante in "Rinaldo" at the Ludwigsburg Festival. A DVD of this production with Florian Götz as Argante was released by Arthaus in 2015.

In 2014 Florian Götz made his debut under Jean-Claude Malgoire in Rossini's "Il barbiere di Siviglia" at the Théâtre des Champs-Elysées in Paris and as Guglielmo in Mozart's "Cosi fan tutte" under Garrett Keast at the Stuttgart Theaterhaus and at the Philharmonie am Gasteig in Munich. At the Handel Festival in Karlsruhe he could be seen as Mago (Rinaldo). In the 2014-15 season he appeared as Papageno in "Papageno and the Magic Flute" at the Leipzig Opera. In addition, he made his New York debut at the Miller Theater under Vincent Dumestre in October 2014.

Concerts and opera engagements in 2015-16 include, for instance, Papageno at the Mozart Festival Würzburg 2015, Brahms' "A German Requiem" under Manfred Jung, Orff's "Carmina burana" at the Philharmonie am Gasteig in Munich, a concert tour with Bach's BWV 201 (Pan) with the Ricercar Consort in Taiwan, Ping (Turandot) at the Landestheater Innsbruck, a CD production for Sony with the role of Lumaca in Salieri's "La Scuola de 'gelosi" with the Ensemble l'arte del mondo, the title role in Monteverdi's "L'Orfeo" with the Lautten Compagney Berlin and Schaunard (La Bohème ) under Marcus Bosch at the Heidenheim Opera Festival. The 2016-17 season included the revival of Handel's "Rinaldo", concerts with Haydn's "The Seasons" at the Festspielhaus Bregenz, Bach's "Christmas Oratorio" at the Trondheim Cathedral, a DVD production of Pagliardi's "Caligula delirante" in Paris with the Ensemble Le Poème Harmonique, Dr. Falke (Die Fledermaus) under Marcus Bosch, the world premiere of Enjott Schneider's cantata "Da ist Freiheit" - which was especially composed for Florian Götz - at the Schwarzwald Musikfestival 2017, the roles of Amanzio and Polidarte in Handel's "Il Giustino" with the Lautten Compagney Berlin at the Winterthur Theater, Corpo in Emilio de 'Cavalieri's "Rappresentatione di Anima et di Corpo" as well as several concerts with opera arias in southern France with the Sinfonietta Bardou under Frederic Tschumi.

In 2018-19 Florian Götz made his role debut as Malatesta in "Don Pasquale" at the Augsburg State Theater. In the opera "List, Scherz und Rache" by Ph. Ch. Keyser based on a text by J. W. Goethe, the baritone was heard in the role of the Doctor with the Ensemble l'arte del mondo (CD recording for Sony). In addition, he sang a solo program with Mozart arias on a Taiwan tour with the Ensemble Formosa Baroque, an Orlando di Lasso program with the Ensemble Zefiro Torna, revivals of "Il Giustino" and "Caligula delirante", several concerts with works by J.S. Bach under Thomaskantor Gotthold Schwarz with the Thomanerchor and the Leipzig Gewandhaus Orchestra as well as the role of the Général in Gossec's "Le Triomphe de la République" with the Göttingen Baroque Orchestra. A program of Mozart arias also led him to Ankara. Engagements in 2019-20 include Papageno (The Magic Flute), directed by Igor Folwill, with the ensemble l'arte del mondo, as well as the role of Barone di Brik-Brak in Gazzaniga's opera "L'isola d'Alcina" at the Schwetzingen SWR Festival (postponed). The Music Festival Potsdam Sanssouci engaged Florian Götz in 2020 as Damon in Telemann's "Pastorelle en musique" with the Ensemble 1700 for the opening premiere of the Schlosstheater (postponed to 2021). Instead he could be heard in Potsdam in a concert with the Akademie für Alte Musik Berlin (AKAMUS). In 2020-21 the title roles in the new productions of Mozart's "Le nozze di Figaro" at the Lübeck Theater (conductor: Stefan Vladar, director: Steven Lawless; postponed to 2022) and in Vivaldi's "Il Bajazet" at the Nuremberg State Theater (conductor: W. Katschner, director: Nina Russi) are on his agenda. Further plans include Aeneas (Dido and Aeneas) with the Lautten Compagney Berlin, a revival of "The Magic Flute" with l'arte del mondo, Damon in Telemann's "Pastorelle en musique" also at the Festival of Early Music in Innsbruck and at the Margravial Opera House Bayreuth, Porus in Handel's "Cleofida" with German recitatives by Telemann at the WDR festival 'Tage Alter Musik' in Herne under Jörg Halubek, Amanzio and Polidarte (Il Giustino) at the Göttingen Handel Festival and the "Sea Symphony" by R. Vaughan Williams with the Staatskapelle Dresden.

Florian Götz also devotes himself intensively to art song and gives recitals with various programs. He performed one of the main works of the genre - Schubert's cycle "Die Winterreise" - in 2017 in Paris with the pianist Fériel Kaddour at the CNSM. In 2018 he gave a recital with the renowned pianist Alexander Schmalcz with Schumann's "Dichterliebe" and Mahler's songs from "Des Knaben Wunderhorn". Under the musical direction of Michael Sanderling, Florian Götz also sang songs from "Des Knaben Wunderhorn" at the Konzerthaus Berlin and the Frauenkirche Dresden. A recital with pianist Eric Schneider was planned for 2020 in the Mendelssohn Hall of the Gewandhaus Leipzig (cancelled). He also works closely with the pianist Daniel Heide. Schubert's "Winterreise" with the Grundmann Quartetin is planned for 2021 in an arrangement for baritone, cor anglais and string trio.

In addition, verious songs by Debussy, Duparc and Fauré as well as songs and canzoni da camera by Tosti, Bellini and Donizetti.

All information are subject to change
Since no binding planning is currently possible, we will not publish any dates for January 2021.